Blake Poore and Curt Reichstetter represented Genesis Properties on the sale of the American Heritage building. 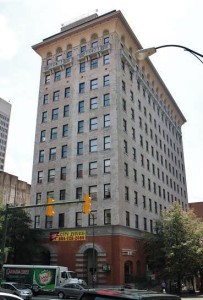 The American Heritage property had been on the market since last year. Ron Hunt of Genesis Properties said the building was approaching the end of its financing period in March.

“We either had to refinance it or sell it, so we decided to just put it on the market and see what the market would bring,” Hunt said. “It’s a great building, great location, and it’s been very good for us for a long time. But you can’t be married to your real estate.”

The 12-story building was the first downtown high-rise, Hunt said. Genesis Properties renovated it in 2005 into 57 apartments plus another 20 office and commercial units.

“It had been an office building that was really hurting,” Hunt said. “The occupancy was really bad, and the seller at the time wanted to get rid of it, and we thought it’d be a great opportunity to convert to apartments and retail.”

“I think they want to have a presence in town,” Hunt said of Time Equities.

Raven Place is also a historic building that Genesis Properties renovated in 2009. It had once been a Form and Fixture manufacturing site and meat packaging plant.

Brokers Chris Chadwick and Dawson Rinder of Marcus & Millichap represented the buyer, and Blake Poore and Curt Reichstetter of Joyner Commercial represented Genesis Properties on the sale of the American Heritage building.

The two sales follow a string of nearly $70 million worth of apartment deals that have closed in recent weeks or are in the works.

With its two deals done, Genesis Properties is moving on to its next project. The company, which also owns Trolley Lofts in Manchester and IronHouse Condominiums and Apartments in the Fan, is currently working on phase two of its Shockoe Valley View Apartments on Union Hill, adding 87 units to the 150-unit property.

It is also planning a new 152-unit project in Henrico County this spring.