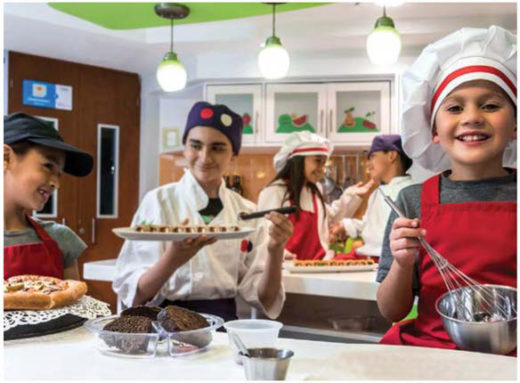 KidZania, an indoor, interactive mini “city” run by kids that has locations around the world, is about to enter the U.S. market by taking large blocks of space in regional malls.

“Most of the real estate that we’re looking at are [former] multi-level department stores;’ and then KidZania will figure out how to repurpose the space, says Gregory Knoop, chief development officer, North America, for KidZania USA.

KidZania operates 27 facilities around the globe, from Mexico City and London to Dubai and Tokyo. The attraction has tallied up more than 72 million visitors since opening its first location in Mexico City in 1999, Knoop says.

KidZania’s centers typically average 80,000 sq. ft. and offer an environment where children ages 4 to 14 can role play in more than 100 occupations. They can pilot air­planes, act in plays, design robots and perform surgery. The company works with more than 900 companies from the Fortune 5000 list, including Sony, Honda and Coca-Cola, to create its “jobs.” The miniature city even boasts its own currency called “kidZos.”

KidZania currently has 10 facilities under development worldwide, including three in the United States. The concept will make its American entrance in the Dallas suburb of Frisco this fall at Stonebriar Centre owned by Brookfield Properties, formerly GGP.

More U.S. locations are expected and KidZania is eyeing additional former department store spaces. “We would suggest that the numbers are going to be comparable to our high-performance locations, which are close to, if not greater than, 1 million annual visitors,” Knoop notes. He says KidZania Tokyo had 1.2 million visitors last year and that location is only 40,000 sq. ft.

There were previously some very specific barriers to entry as it related to the U.S., one of which was the cost of real estate, Knoop says. “And that, in today’s softer market and with repurposing of malls, has been mitigated,” he adds.

Other barriers have been the high cost of U.S. labor and construction. However, he points out that many landlords are chipping in.

“Landlords have been paying the cost to deliver the warm shell, plus conditions for us,” Knoop says. That means they’re making some contribution to KidZania’s interior improvement costs.

The rationale behind that for landlords, according to Knoop, is the amount of traffic that KidZania is expected to generate.

“Were getting landlords to offer pretty significant contributions to help offset the leasehold improvement costs for larger tenants,” he says. “It’s a way to incentivize. There are not a lot of larger tenants doing deals out there, and if the investment could be somewhat taken on by the landlord, it really helps from a tenant’s perspective to look at some of these deals.”